According to the CDC, sugar-sweetened beverages are the largest source of added sugar in the average American’s diet, and the Dietary Guidelines for Americans recommend individuals consume no more than ten percent of calories per day from processed or added sugar. From the UNC Chapel Hill Nutrition Research Institute (NRI), scientists are investigating the connection between these beverages, human genetics, and uric acid metabolism.
Hyperuricemia, which is an excess of uric acid in the blood, is often known for causing gout, but high levels of uric acid in the body are also linked to kidney disease and heart disease. Sugar-sweetened beverages make up a large percentage of products in the average person’s diet, and researcher Saroja Voruganti, PhD, an assistant professor of nutrition at the NRI, is working in collaboration with the MURDOCK Study to investigate the impact of sugary drinks on uric acid in the body. Both the NRI and the MURDOCK Study are partners at the NC Research Campus (NCRC) in Kannapolis.
Fundamentals of Uric Acid
Uric acid is created by the body while breaking down purines, organic molecules obtained from both within the body and from an individual’s diet. Considering both internal and external purine sources, on average a person produces about 700 milligrams of uric acid every day. In addition to sugar-sweetened beverages, foods like white bread, cakes, candy, fatty meat, high-fat dairy products, and some alcoholic beverages provide an especially high dose of purines. A diet high in these foods can lead to hyperuricemia.
Scientists define uric acid metabolism as “normal” when the day’s uric acid is excreted by the body on a regular basis. Whether it is an error in metabolism that leaves excess uric acid in the body or a diet high in purines, hyperuricemia can cause a variety of health complications.
The “Fructose Challenge”
To prevent hyperuricemia-related pathologies like gout, kidney stones, chronic kidney disease, obesity, hypertension, and other metabolic disorders, Voruganti and her team of researchers at the NRI are beginning a “fructose challenge” study on participants from multiple populations from MURDOCK Study cohorts. The NRI is equipped with a Human Research Core where Voruganti can bring in participants and measure uric acid and kidney function markers from blood and urine samples before and after participants drink a sugar-sweetened beverage. 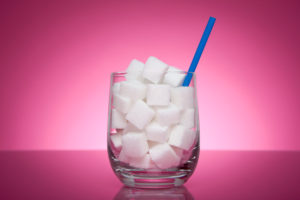 “We want to look at the interaction between genes and uric acid metabolism when different participants drink these sugary beverages,” Voruganti said.
Voruganti and the team from the MURDOCK Study will analyze data from 60 participants, with the clinical trial awaiting approval from the Duke Institutional Review Board, which conducts reviews of research studies involving human subjects.
Making healthy choices
In addition to containing a plethora of nutritional benefits, scientists recommend that eating more vegetables as well as vitamin C, coffee, and cherries can help reduce a person’s risk of hyperuricemia. The NRI as a whole aims to show how studying and applying precision nutrition can lead to successful clinical interventions, preventing and treating chronic disease as well as enhancing human development, and Dr. Voruganti’s research on uric acid is part of the effort.