The Ironies of Iron During Pregnancy

This article was published originally on transforming-science.org
August 28, 2017 – Iron is listed by the American Pregnancy Association as one of the nutrients essential for healthy fetal development. Why? Because a lack of iron, a mineral naturally found in foods like meat, seafood and vegetables, directly impacts the development of the fetal brain. Iron also prevents anemia, low birth weight and premature delivery. Unfortunately, 22 percent of US women in their childbearing years are iron deficient, says Susan Smith, PhD, deputy director of science at the UNC Nutrition Research Institute on the NC Research Campus. This means the mother-to-be doesn’t have enough iron to support both her growing fetus and herself. Smith’s lab studies how genetic and environmental factors affect prenatal development, including nutritional impacts like iron intake and how alcohol consumption leads to fetal alcohol spectrum disorders (FASD). 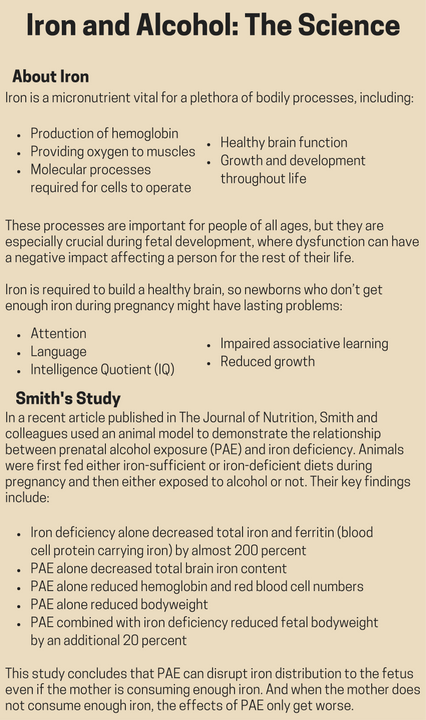 Diet or Supplements
Iron levels can be increased by eating more beef, poultry, shellfish, lentils, beans, and spinach, or by taking supplements. Some women have trouble consuming enough iron because iron-rich foods can be expensive. And while lentils, beans, and spinach are more affordable, they have a different kind of iron than meat and shellfish – nonheme iron – which is absorbed less efficiently.
Supplements are another option, but even when doctors prescribe them, Smith says, it can be hard to take them regularly because the supplements can cause gut irritation or constipation. For a pregnant woman who is already experiencing uncomfortable changes in her body, adding another discomfort is probably the last thing she wants.
Smith and her research team are looking for a solution by studying optimal forms of iron, either from natural sources or in a supplement, to help mother and fetus. The additional challenge, says Smith, is that “we can feed mothers all the iron we want, but is the fetus using it effectively?”
Another Complication
One lifestyle choice made by women that affects how a fetus uses iron is drinking alcohol. “The parallels between alcohol exposure and iron deficiency are striking,” Smith explained. “Both cause similar growth reductions and behavioral deficits in the child.” She has studied alcohol and pregnancy for nearly 26 years and found that alcohol disrupts how a fetus uses iron.
Exposure to the mother’s alcohol causes inflammation that puts the fetus’ cells into alert status, which results in iron being stowed away in the liver. “One of the body’s defenses against infection is to put iron into storage,” Smith explained. “In this case though, the mother doesn’t have an infection. She’s drinking alcohol. But the body doesn’t know the difference.”
Smith emphasizes that when iron is stockpiled in the liver, it is virtually useless because alcohol prevents other organs from using it. Meanwhile, the fetal brain is stunted by the lack of iron, which can result in changes in behavior and cognitive function that can have negative consequences throughout a person’s life.
Smith acknowledges that the specific effects of alcohol exposure during pregnancy vary for each woman and that many factors determine the health of a pregnant woman and her baby. Still, she cautions that drinking during pregnancy is risky, especially since no form of iron can resist the effects of alcohol, at least none that Smith has found so far.
For Smith, what is most important is that women know that when they are pregnant they should increase their iron intake and think twice about drinking alcohol. “Alcohol prevents a baby’s healthy development. It may also prevent the baby from using nutrients efficiently,” she explains. “Our work strives to understand and address that problem. This way, we can give women the best scientific advice to help them make the best decisions for their health and for their family’s health.”