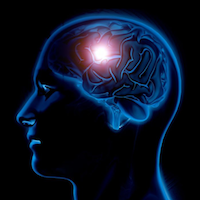 December 12, 2018 – The importance of choline to brain development and function was first demonstrated in the 1980s, but because choline has multiple fates and functions within the body, the question of how choline levels specifically impacted neural development has remained unanswered. In research just published in The FASEB Journal, NRI director Steven Zeisel, MD PhD, and NRI assistant professor Natalia Surzenko, PhD, make a major contribution towards answering this question.

What they did:
In previously published research (Wang et al., 2016), Zeisel’s team had shown that in mice, a maternal diet low in choline led to developmental defects in the brains of offspring.  They further determined that these defects were caused by decreased expression of a protein called EGFR.  In their new publication (Trujillo-Gonzalez et al., 2018), Zeisel’s and Surzenko’s teams identify increased levels of the micro RNA miR-129-5p as the key regulator of EGFR.  Importantly, they also show that levels of miR-129-5p are dependent on the ratio of two related molecules, S-adenosylmethionine (SAM) and S-adenosylhomocysteine (SAH), which link the observed neurodevelopmental defects with dietary intake of choline.
Choline is an important molecule in part because it serves as a major cellular methyl donor.  Methyl groups are used for biosynthesis and as markers that can regulate numerous cellular processes.  SAM and SAH are the major player involved in shuttling methyl groups around the cell.  SAM can carry methyl groups from donors such as choline to a variety of molecular acceptors including DNA, lipids, and proteins.  By transfer of the methyl group SAM is converted to SAH (SAM and SAH can be thought of as a full vs. empty Uber, with the methyl group as the passenger).
When cellular choline levels are low (as would happen with a diet very low in choline), there is decreased availability of methyl donors and the SAM/SAH ratio decreases (fewer full Ubers).  Trujillo-Gonzalez et al. now report that a decreased SAM/SAH ratio leads to increased miR-129-5p levels and, consequently, decreased EGFR levels.  Decreased EGFR, in turn, impairs normal brain development.

Why it matters:
Maternal choline supplementation vs restriction impacts memory and cognitive function in offspring and the effects can last into adulthood. This research is a major step in our understanding of why this is the case, and strengthens the connection between maternal choline levels and offspring brain development.  Choline levels are determined partly through diet and partly through biosynthesis (i.e, created within the body).  A very common mutation in humans impairs this ability to make choline. In these individuals, choline levels are much more dependent on dietary intake, so they need to consume more choline to maintain similar cellular levels.  This study emphasizes why it is important to be aware of a person’s genetic makeup when determining an optimal diet, especially during pregnancy.