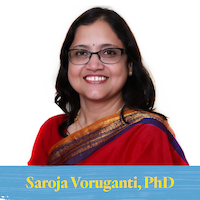 Saroja Voruganti, PhD, has covered a lot of ground in her journey to becoming a faculty researcher in nutrition, genetics, and epidemiology at the UNC Nutrition Research Institute. Born into a traditional south Indian family, she grew up in Delhi in northern India where she graduated with an undergraduate degree in nutrition. Then she married and moved to western India. Even as she focused on marriage, home, and raising a family in the traditional Indian way of life, she kept alive her dream of pursuing advanced studies and contributing outside of family life.

When her children were young, she enrolled in a post-graduate degree program in dietetics and hospital food service. When she found people reluctant to follow her advice about changing the way they ate, she decided that she needed to study further to better understand nutritional deficiencies and solutions. It was a bold move, going against the traditional Indian upbringing encouraged for women, but she was determined. However, at the same time, her husband’s work required the family to move to the United States, temporarily halting her academic pursuits.

Once her family settled in Texas, Voruganti resumed her goal of acquiring a doctoral degree and she began seeking a PhD supervisor. While she had the full support of her husband and two children, she was turned down by many researchers because she didn’t have a significant science background. Dr. Jeanne Freeland-Graves, Professor of Nutrition at the University of Texas–Austin said “yes” and her life changed in that moment. Voruganti was on the path to a PhD in nutritional sciences.

On completing her PhD in a little under five years, Voruganti became a postdoctoral research scientist in San Antonio at the Texas Biomedical Research Institute where she received training in genetic epidemiology. Her supervisor, Anthony Comuzzie, PhD, and mentors and collaborators Shelley Cole, PhD, and Nancy Butte, PhD, encouraged her to take chances and to believe that she could accomplish goals that seemed insurmountable. It wasn’t an easy journey balancing marriage and family with work, as well as commuting between her family and home in Austin and her work in San Antonio. But she had overcome great obstacles along her chosen path already, and she persevered.

In 2013, at the encouragement of Kari North, PhD, of the UNC–Chapel Hill Department of Epidemiology, Voruganti met Steven Zeisel, MD, PhD, director of the UNC Nutrition Research Institute in Kannapolis, NC. Zeisel recognized that Voruganti’s specialties in nutrition, genetics, and epidemiology were exactly what he needed at the NRI where those and other fields of inquiry are coming together to advance our knowledge of precision nutrition. “Dr. Voruganti has several special skills – she understands genetic variation (the differences in the spelling of genes) and she knows how to study large populations (epidemiology),” says Zeisel. “ This type of work provides unique insights about why people vary in their need for certain nutrients.”

She applied and was appointed an assistant professor of nutrition at the University of North Carolina at Chapel Hill, establishing her laboratory at the NRI in Kannapolis. She credits Zeisel, along with North, Comuzzie, Cole, Butte, and Freeland-Graves with much of her success in achieving her goal to become a primary investigator. At each step, these accomplished scientists recognized Voruganti’s keen mind and chose to encourage her scientific pursuits. “Dr. Voruganti is one of the hardest workers I know, and it shows in the amazing number of scientific publications she has authored at this early stage in her career,” Zeisel says.

As she looks to the horizon, Saroja Voruganti sees identifying and categorizing human genotypes as a key in advancing the field of nutrigenomics and precision nutrition in human health. She knows some in the field are skeptical of the usefulness of this approach. But she has stood at the foot of high mountains in the past and made the summit despite many challenges. Advancing precision nutrition for better health for us all is the mountain she is climbing now.