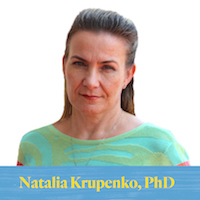 For some, it would be difficult to leave the idyllic coastal city of Charleston, South Carolina behind for small town life in Kannapolis, North Carolina. That wasn’t the case for Natalia Krupenko, PhD. As she interviewed to join the faculty of the Nutrition Research Institute, she was often asked what her motivation for the move was. From her perspective, it was simple. “I said, of course, for work. Of course, for work. The work is fantastic here.”

Krupenko, Assistant Professor of Nutrition at the UNC Nutrition Research Institute (NRI) and in the Department of Nutrition at the Gillings School of Global Public Health at UNC-Chapel Hill, has never shied away from the hard work that it takes to answer complex scientific questions. Growing up in Belarus, she was exposed to nature and biology while spending summers with her grandmother, who would pick and dry medicinal plants. When Krupenko asked her grandmother, “Why do you do that?” she was told that the plants could be used later to soothe a sore throat or upset stomach. This sparked an interest in biological sciences that would stay with her throughout her schooling.

Krupenko’s interest in science matched her natural abilities in the areas of math, physics, and chemistry. These interests and abilities all paired well with health. When Krupenko graduated from secondary school, she considered working towards a medical degree. Her decision to pursue biochemistry happened serendipitously. Normally, a student interested in pursuing a degree in the sciences would need to choose a specific department to study with: biology, chemistry, or physics. For two years, the student would study general college subjects. At year three, the student would pick one topic to focus on. The year Krupenko enrolled at the Belarusian State University, a new biochemistry program was announced that would focus on biochemistry from year one. It all clicked into place, Krupenko says: “It’s chemistry that I like, it’s biology that I like and know well, and it’s all together. So, I just jumped into it and never left.”

Indeed, Krupenko has stayed immersed in the world of scientific research since her days as a college student. After finishing her undergraduate studies at the Belarusian State University, she entered a graduate program with the Institute of Bioorganic Chemistry at the Academy of Sciences of Belarus before completing her PhD in bioorganic chemistry. It wasn’t easy. To finish her PhD program, Krupenko needed to get through one of the most difficult qualifying exams that one can imagine. In 1987, she defended her PhD and began post-doctoral work in Minsk, Belarus.

Originally, Krupenko’s research studied the function of the proteins binding sex hormones in the blood. At the time, there was a strong belief that these hormones got into cells in free form. But researchers knew that, in blood, these hormones are bound to proteins rather than traveling free. Why would they need to be bound to a protein in blood if they could enter a cell on their own? This research became the subject of Krupenko’s fellowship. As a Rockefeller Foundation Fellow, Krupenko was offered the opportunity to continue her research at Vanderbilt University’s Reproductive Biology Research Center.

She was not alone. Krupenko’s husband, Sergey Krupenko, PhD, is also a biochemist. Together, they moved their family from Belarus to the United States to work at Vanderbilt. It was at Vanderbilt that Sergey Krupenko took a position in a lab that would ultimately influence Natalia Krupenko’s work. As Natalia’s fellowship came to an end, she began a proposal that would allow her to continue working in the Reproductive Biology Research Center. While it might seem strange to us today, at the time reproductive biology was not an area that received much attention for funding. While Natalia was interested in continuing her work in the field, funds were tight, and grants were not available. At this same time, the professor for whom Sergey worked was seeking a post-doc to work on a project in folate metabolism.

Krupenko decided to take the position and switch her area of focus to folate metabolism. It was a good decision. The professor in charge of the lab was not just well-funded – he was well-established. Having already served as a director of research and department chair, he was no longer interested in seeking administrative positions. He was interested in science. This gave Natalia a broad spectrum of options as a post-doctoral researcher and influenced how she works with her post-doctoral team today: “I always tell my post-docs, enjoy, now you do not have responsibility for anything except asking interesting questions and answering them.”

And so, Krupenko began to do just do that – asking and answering questions related to her new research field of folate, specifically folate and methylation. She also had the chance to work in parallel with Sergey, who worked with the same Principal Investigator (PI) in a neighboring lab. It was at this time that Sergey applied for an NIH grant – and received funding. Sergey also accepted a position at the Medical University of South Carolina (MUSC) in Charleston, and moved to begin his new job in September 1999. By January 2000, Natalia also joined MUSC as a Research Assistant Professor and head of the DNA Sequencing Facility. She also brought some of her own funding from Vanderbilt – a subcontract to continue her research in folate and methylation with her former PI.

At MUSC, Krupenko learned a lot about budgeting, lab management, and writing proposals for funding every year to maintain her facility. As preliminary results of her research came in, Krupenko wrote grant proposals to fund her methylation project. She received funding and switched from a research track professorship to a tenure track. At scientific meetings, she and Sergey began to cross paths with Dr. Steven Zeisel. They knew that he was hiring scientists to work at the recently opened Nutrition Research Institute in Kannapolis. In 2012, Natalia and Sergey accepted an invitation to visit the NRI and present their research. They enjoyed the facilities, the team, and the collaborative environment of the North Carolina Research Campus. The main thing, they decided, was that a move to the NRI would give them the opportunity to make a new push, to do new things, explore new areas, and maybe open new branches of research.

At MUSC, Natalia had a strong group of colleagues whose major interest was sphingolipids, a type of lipid believed to protect the cell surface from harmful environmental factors. Following one of the faculty meetings, Sergey threw an idea: What if sphingolipid metabolism and signaling could be linked to folate? After many vigorous discussions and some preliminary experimenting, Natalia began a pilot project from a larger program grant at MUSC and proved the link between folate and sphingolipids publishing her results in JBC in 2013. On arrival at the NRI in 2014, she applied for and won NIH funding to continue exploring this subject. Krupenko pursues research of sphingolipids under this grant funding, and also keeps her folate methylation project.

Much of the work that Krupenko does is at the molecular level and can be difficult to immediately apply in practice. But in combination with other knowledge, it helps to develop efficient dietary and therapeutic approaches to better human health. In fact, Krupenko acknowledges that her scientific experience and knowledge only make her more aware of just how complex nature is – more so than we can know or imagine. We can decipher mechanisms, but nature is always a little more complex than we can reduce it to. How can we tackle these complexities to make good nutritional decisions in our everyday lives? Krupenko suggests versatility. Even well-guided attempts to eat highly specific, nutritious diets can lead to missing out on some nutrient or combination of nutrients that might make you healthier. By eating a versatile diet, we have a higher chance of getting everything we need. Scientists have identified so many micro- and macronutrients, but we still don’t know exactly how they all work or which ones are best for individuals. There are still so many questions to be answered, and Krupenko remains curious. She may have more responsibilities now as the leader of her own lab, but her priority remains seeking out the answers.