Choline must be integrated into the prenatal supplement regimen, says expert review 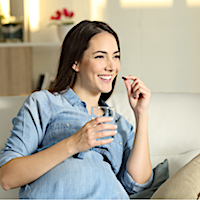 The importance of choline during the first 1,000 days after conception is increasingly understood by the medical community, and dietary supplement manufacturers are “beginning to recognize the potential that choline offers” says an industry expert.

A new expert review published in the journal of Dietary Supplements calls choline the “neurocognitive essential nutrient of interest to obstetricians and gynecologists,” and states unequivocally that “Choline must be integrated into the parenatal supplement regimen.”

But intakes remain stubbornly low: According to National Health and Nutrition Examination Survey (NHANES) data, 90% of chldren, adults and pregnant women are not getting enough. The Adequate Intake (AI) for adults is 425 mg/day for women and 550 mg/day of choline for men.

According to the new review, lead by Dr. Taylor Wallace for D.C.-based Think Health Group, choline has ranked last among common nutrients to recommend for a healthy diet, and fewer than 6% of obstetricians and gynecologists are likely to recommend choline-rich foods to pregnant women.

Dietary supplements may offer a way to help close this shortfall, but historically very few (if any) prenatal multivitamins were formulated to contain choline.

One of the challenges has been around working with choline – forms like choline bitartrate and choline citrate are hygroscopic- but the biggest hurdle to formulating with meaning choline doses is finding room in a tablet format that has a broad range of nutrients all competing for space, explained Tom Druke, Director of VitaCholine Brand Development, Balchem Human Nutrition and Pharma.

“Choline Bitartrate is about 40% choline cation by weight and this means that adding a meaningful amount of choline can be a challenge in a signle dose,” he explained. “To help address this challenge, many multivitamin companies are formulating a single-ingredient tablet with choline – this approach allows for a standard prenatal multivitamin plus choline in a separate dose, much like the industry did with DHA.”

The American Medical Association (AMA) recognized the essential role of choline during pregnancy a couple of years ago and proactively recommended that choline be included in all prenatal multivitamins.

A 2016 study found that only eight of the top 25 prenatal vitamins contain choline and none provide more than 55 mg per daily dose, or just 12% of the DRI for pregnant women, he said.

That, thankfully, is changing.

“It generally takes a little time for brands to reformulate vitamins, but we’ve heard of several who have completed reformulations or are actively working on it,” said Druke. “MegaFoods introduced a Baby and Me 2 prenatal formulated by Dr. Tierona Low Dog with with 300 mg of choline. Also, Nature Made launched a new prenatal gummy SKU with choline, and SmartyPants has increased the choline levels in their gummy line as well.”

There’s also pick-up in the dairy space, he said, with Brainiac fortified yogurt for kids launching earlier this year with choline, DHA and probiotics for brain health. Clover Sonoma dairy farm announced at Expo West they would be launching a new fortified organic milk with 50 mg of DHA and 100 mg of choline.

“Clearly manufacturers are beginning to recognize the potential that choline offers, not only for infant development but also for cognition throughout life,” Druke said.

Building awareness around choline, and educating the healthcare practitioner community is an important issue here.

“Advocacy for choline levels awareness from the medical community intensified in early 2018 with an important policy statement from the American Academy of Pediatrics published in the journal Pediatrics outlining the importance of proper nutrition during the first 1,000 days of life,” said Druke. “Choline was noted as one of several substances that this leading medical institution specifically called out as ‘brain-building-nutrients’.”

Druke noted that government agencies are taking action to further the standing of choline in the nutritional field.

“Choline is the latest nutrient to receive a Reference Daily Intake (RDI) and the Scientific Report of the 2015 Dietary Guidelines for Americans Committee (DGAC) called out choline as one of four ‘shortfall nutrients’ with inadequate intakes across all adult dietary patterns,” he said.

“We think the 2020 DGA offers the opportunity to introduce choline to Americans as an under-consumed yet important nutrient.”

It may also be getting easier for people to check their choline levels, added Druke, noting that a significant grant was awarded to UNC Nutrition Research Institute in 2018 to develop and validate laboratory tests able to assess choline status in humans.

“The National Institute of Diabetes and Digestive and Kidney Diseases (NIDDK), one of the National Institutes of Health, awarded director Steven Zeisel, MD, PhD [one of the authors on the new review] a four-year, $2.6 million grant after he demonstrated that the studies were feasible and likely to succeed based upon proof-of-concept data in a pilot study funded by Balchem Corporation,” Druke said.