Choline: The forgotten vital nutrient we’re not getting enough of 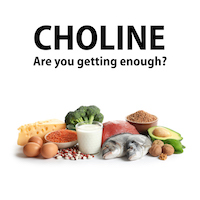 But there is another essential nutrient that most of us have never heard of – and that standard advice may be stopping us getting enough of it. The substance is called choline and Emma Derbyshire at Nutrition Insight, a consultancy in Surrey, UK, recently argued in the journal BMJ Nutrition, Prevention & Health that a lack of it might be an emerging public health crisis.

It is still unclear exactly how much choline we need. But because eggs and red meat are some of the best sources of choline, the trend for eating fewer animal products could mean we are missing out on a vital nutrient without knowing it. Even those of us who eat meat might not be getting enough.

In the past, most vitamins were discovered because people who were malnourished got a characteristic disease that was cured when they ate certain foods. Sailors deprived of fresh fruit got scurvy because they lacked vitamin C, for example.

Choline’s history is less straightforward. It was first isolated from bile in 1862 and was later found to play many roles in the human body. It makes up cell membranes, and is important in the liver’s fat metabolism. It also helps make a nerve signaling molecule called acetylcholine, found in the brain and muscles.

It was thought, though, that the human body could make its own choline. It produces plenty of other biochemicals, and there was no known choline deficiency disease.

That was questioned in the 1980s, partly because of studies showing that some animals get sick on a diet lacking in choline. Steven Zeisel at the University of North Carolina then devised a definitive test by getting volunteers to stay in hospital for several weeks eating only the food provided.

His team created a baseline diet with very little choline – mainly salads, a soy-based protein shake and bread rolls. Some people got rolls with added choline, some didn’t.

Within a few weeks, the volunteers who got rolls without choline had more liver enzymes in their blood and their livers accumulated fat. When they were switched onto the choline-laced bread, they recovered. “I had discovered the first new nutrient since the basic vitamins,” says Zeisel.

Because of this and other lines of research, choline was reassessed. It turned out that human breast milk is rich in choline, and that pregnant women pump it across their placenta. Levels can be 10 times higher in fetuses than in mothers’ blood. That had to be for a reason.

It is now accepted that adult livers can make some choline, but most of us don’t produce enough to meet the body’s requirements. In 1998, the US Institute of Medicine advised that men should consume 550 milligrams a day and women 425 mg (more if they are pregnant or breastfeeding).

Most people don’t hit that level. Surveys suggest that average daily intake ranges from 260 to 470 mg. Large numbers of people aren’t being hospitalized with liver failure, though, so perhaps the original targets were too high. They were based on Ziesel’s study that compared just two diets, one with 500 mg of choline a day and one with 50 mg. It is possible that some intermediate level is enough.

Still, some people may need more choline than others. About one in three people in the US have a mild case of fatty liver. This is usually blamed on unhealthy eating. But Zeisel says lack of choline may be responsible in some cases. He has shown that people with fatty liver are more likely to have certain gene variants that mean they make less choline.

However, the biggest concern over choline intake is connected to fetal brains. Animal research suggests that choline is needed to build brains: when pregnant mice are deprived of choline, their babies do worse at mental tasks like negotiating mazes.

There have also been a few small trials to see if giving pregnant women higher doses of choline helps their fetuses’ brain development. Results are mixed, but one of the longest trials showed that when the women took twice the recommended dose of choline while pregnant, their children did better at a simple memory task when 7 years old. “There’s something very special about this nutrient,” says Marie Caudill at Cornell University in New York, who helped run the trial.

Choline might not just affect the brain while it is developing. Studies in mice suggest that higher choline intake in adulthood staves off the effects of dementia, although trials in people haven’t yet been done.

For babies and fetuses at least, there is growing consensus that choline is essential. Baby milk manufacturers must now ensure a minimum level in their products, both in the US and Europe. And in 2018, the American Academy of Pediatrics called for pregnant women to ensure they are getting enough choline.

That isn’t easy. Most prenatal multivitamins contain no choline. Some include a dose of 100 mg, which is much less than the advised 425 mg for pregnant women in the US. The trouble is, including that amount in a multivitamin tablet would make it too bulky to swallow. The UK National Health Service’s dietary advice for pregnant women also makes no mention of choline.

Derbyshire says choline should be of particular concern for those eating fewer animal products. There are plant sources of choline, such as nuts and soya beans, but they contain far less than eggs and red meat (see Graph). “You can get it, but you have got to be very rigorous in your diet,” says Derbyshire.

“If a substance in meat is so beneficial, why do people live longer when they eat less red meat?”

Vegetarians and vegans can, of course, take choline supplements. But many don’t know to do so. The UK Vegan Society says choline is nothing to worry about for those eating a varied diet mainly based on minimally processed plant foods. A spokesperson told New Scientist that the nutrient wasn’t on its agenda until recently, saying, “it’s just not a nutrient that deserves any attention”.

This is where the emerging science on choline gets entangled with the wider debate over meat. As is common in nutrition research, some of the studies have been funded by the food or supplement industries, which some people find suspicious.

Advocates of veganism highlight that Derbyshire has been a member of industry-funded meat and choline advisory panels. She says, however, that she has advised numerous commercial bodies, including a vegan food firm.

Others are just keen that the spotlight on choline doesn’t detract from the possible health benefits of plant-based foods. “Choline is clearly an important molecule, but we still don’t know what amounts are needed for optimal health,” says Walter Willett at Harvard Medical School. “This should not delay us from shifting to healthier and sustainable diets.”

Willett points to a paradox. If a substance found mainly in animal products is so beneficial, why does most research find that people live longer when they eat less red meat?

It may be that the benefits of eating less saturated fat outweigh the harms of less choline – if so you could get the best of both worlds by swerving meat and taking supplements. Some have recently argued that the advice to avoid red meat was wrong, because it was based on potentially flawed population studies rather than randomized trials (New Scientist, 5 October).

We still have lots to learn about choline. But there are signs that it is getting on more people’s radar. Vegan bloggers are talking about it, and Derbyshire’s recent paper has grabbed attention. “I just want to raise awareness,” she says.