A Nutrigenetic Study of Purine Metabolism and Cognitive Function 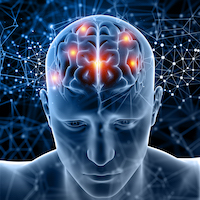 Nutrigenetic research at the NRI often focuses on brain development and health across the lifespan. Recently, faculty members Carol Cheatham, PhD, and Saroja Voruganti, PhD, received a supplemental grant from the National Institute of Aging (NIA), a division of the National Institutes of Health (NIH), to study how purine metabolism affects cognitive function.

Alzheimer’s disease is a disease in which memory declines gradually over a number of years. The memory loss is mild in its early stages but in later stages, individuals completely lose their memory and thinking skills thus affecting their daily activities. Alzheimer’s disease is the sixth leading cause of death in the United States and impacts more than 5 million Americans irrespective of cultural and ethnic background. The prevalence of AD is expected to increase to 14 million by 2050 in the US and 130 million worldwide.

Decline in memory is the first step in the progression of Alzheimer’s disease. Given that there is no cure for this disease, there is a great interest in being able to predict who is at high risk for developing Alzheimer’s disease. Current studies have shown that several genes and metabolic pathways affect memory and cognition. One of the pathways that is gaining strength as a potential treatment target is purine metabolic pathway. Purines are groups of chemicals that form nucleotide bases as part of nucleic acids, DNA, and RNA. Purines undergo several steps before they are finally degraded to form uric acid which seems to have a protective effect on memory and cognition.

With this grant, Cheatham and Voruganti propose to measure uric acid and other purines in older adults at two timepoints and will also test their memory and cognition at the two timepoints. The researchers will generate a statistical model that will help in predicting which individuals are at higher risk of developing memory decline based on their purine measures and genetic variants. The study will begin in August 2020 with anticipated results by March 2021.

This study is funded as a supplement to UNC-CH’s Nutrition Obesity Research Center, one of 11 centers in the country funded by the National Institute of Diabetes and Digestive and Kidney Diseases.