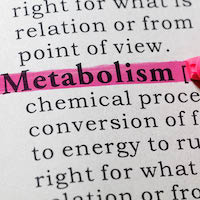 This article was originally published on knowablemagazine.org on July 28, 2020.
By Jyoti Madhusoodanan

Genes, microbes and other factors govern how each person’s body processes nutrients. Understanding the connections could help optimize diets — and health.

For many years, researchers and clinicians assumed that nutrition was a one-size-fits-all affair. Everybody needs the same nutrients from their food, they thought, and a vitamin pill or two could help dispense with any deficiencies.

But now scientists are learning that our genes and environment, along with the microbes that dwell in us and other factors, alter our individual abilities to make and process nutrients. These differences mean that two given people can respond to identical diets in different ways, contributing to varied health outcomes and patterns of disease.

Until recently, scientists didn’t fully appreciate that individual metabolic differences can have a big impact on how diet affects the risk for chronic diseases, says Steven Zeisel, director of the Nutrition Research Institute at the University of North Carolina, Chapel Hill. The new knowledge is resolving long-standing mysteries about human health and paving the way toward a world of “precision nutrition,” Zeisel writes in a recent article in the Annual Review of Food Science and Technology.

Although the findings are unlikely to lead all the way to hyper-individualized dietary recommendations, they could help to tailor nutrition to subsets of people depending on their genetics or other factors: Zeisel’s company, SNP Therapeutics, is working on a test for the genetic patterns of 20-odd variants that can identify individuals at risk of fatty liver disease, for example. Knowable Magazine spoke with Zeisel about our developing understanding of precision nutrition.

This interview has been edited for length and clarity.

Why has nutrition lagged behind other research areas in medicine?

Nutrition studies have always had a problem with variability in experimental results. For instance, when infants were given the fatty acid DHA [docosahexaenoic acid], some had an improvement in their cognitive performance and others didn’t. Because some showed improvements, it was added to infant formula. But we didn’t understand why they were responding differently, so scientists continued to debate why we did this if only 15 percent of children improved and 85 percent showed no response.

The confusion came from an expectation that everybody was essentially the same. People didn’t realize that there were predictable sources of variation that could separate those who responded to something from those who did not. For DHA, it turned out that if the mother had a difference in her genes that made her slow to produce DHA, then her baby needed extra DHA and responded when given it. That gene difference occurs in about 15 percent of women — and, it turns out, it’s their babies that get better when given DHA.

How are researchers starting to make sense of this variability?

Studying differences in human genetics is one way. We conducted a series of studies that found a good deal of variation in the amounts of choline [an essential nutrient] that people required: Men and postmenopausal women got sick when deprived of it, but only half of young women became sick.

We found that some women can make choline because the hormone estrogen turns on the gene to make choline. Other women have a difference in this gene that makes it unresponsive to estrogen. Men and postmenopausal women need to get the nutrient another way — by eating it — because they have minimal amounts of estrogen.

If I had initially done the choline study and chosen only young women participants, I would have found that half needed choline, half didn’t, and had a lot of noise in my data. Now that we can explain it, it makes sense. What seemed to be noisy data can be better described using a precision nutrition approach.

Are there other nutritional conundrums that suggest these sorts of variations are common?

There are some things for which we already know the underlying genetic reasons. For example, there’s a great deal of information on genetic differences that make some people’s cholesterol go up when they eat a high-fat diet while other people’s doesn’t. Researchers are discovering genetic variants that account for why some people need more vitamin D than others to get the same levels in their blood.

Every metabolic step is controlled by such variants. So, when we find people who seem to be responding differently in our studies, that’s a hint that there is some underlying variation. Rather than throwing the data away or saying participants didn’t comply with the study protocol, we can look at the data to discover some of the genetic reasons for these differences. Precision nutrition is really a change in how we do nutrition research, in that we’re starting to identify why some people respond and some don’t.

Studies examining the effect of diet on health are difficult to interpret because usually the people enrolled in a study differ from each other — in terms of genetics, environment, the microbes that live in their guts, and more. The result (top) is a broad range of individual responses that may average out to zero. But when people are grouped according to specific genetic variants, for example (bottom), the relationship between diet and health is easier to spot.

Besides genetic variants, are there other factors that precision nutrition needs to take into account?

Right now, much of our ability to be more precise comes from better tools to understand genetic variation. But genetics alone doesn’t determine your response to nutrients. It interacts with other factors too.

The microbiome [the community of bacteria and other microbes that live in and on our body] clearly also affects how nutrients work. Most microbiome research until now has been to name the organisms in the gut, but it’s now getting to the point where researchers can measure what microbial genes are switched on, what nutrients are made by gut microbes, and so on. As that research matures, we’ll be able to get much better recommendations than we do now.

Our environment could be a very important factor as well. We’re starting to be able to measure different environmental exposures by testing for thousands of chemicals in a drop of blood. Epigenetics, which is the science of chemical marks placed on DNA to turn genes­ on and off, will also likely contribute to important differences. It’s been a hard field because these marks vary in different tissues, and we can’t easily get a sample of liver or heart tissue for a nutrition test. We have to track these changes in the bloodstream, and estimate whether they’re the same changes that occurred in the organs themselves.

We’ll have to include each of these factors to improve our predictions of who will or won’t respond to a certain nutrient. Eventually, precision nutrition will have all of these inputs at its early stages.

There are various precision nutrition tests now being sold by different companies. Do they have anything useful to offer?

Right now, most tests look at one gene at a time in a database and say, “You have this gene difference and it makes you more susceptible to something.” But the metabolic pathways for most nutrients are not controlled by a single gene. There may be 10 or 20 steps that all add up to how you respond to sugars, for example, and any one of those steps can cause a problem. Knowing where you have variations all along the pathway can help us predict how likely you are to have a problem metabolizing sugar. It’s more sophisticated, but it’s also harder to do.

Are there ethical concerns with precision nutrition?

Once I know something about a person’s genetics for nutrition, I may be able to predict that they’re more likely to develop a disease or a health problem. That could change whether an insurance company wants to cover them. We have to try to make that risk clear to people, and also work on improving privacy so their information isn’t available to anybody but them.

The other problem is that wealthier people can afford to do these genetic tests and others can’t. But we can use precision nutrition to find alternate solutions. For instance, women who can’t turn choline production genes on with the hormone estrogen are at higher risk of having babies with neural tube defects and poor brain development. If we need a test for only that one gene difference, a test like that could be reduced to a few dollars and made widely available. Or we might choose to just give everybody choline supplements, if that proves to be a more cost-effective solution.

In the long run, will these discoveries help prevent disease?

There is an advantage in seeking more precise advice for some problems right now. With obesity, for instance, we know that as people gain weight, they develop a group of problems called metabolic syndrome that’s related to the accumulation of fat in the liver. We know that because of genetic differences, about 20 percent of the population is much more likely to develop fatty liver — and is at higher risk for developing these related problems. If we can test for these gene differences, then we can identify those who will benefit the most from changes in diet and weight loss and treat them, either with supplements, drugs or lifestyle changes.

Salt sensitivity is another example. About 10 percent of people have higher blood pressure when they eat high-salt diets. Right now, because we don’t know the metabolic differences that contribute, we say everybody should stay away from salt. But the truth is, only about 10 percent of people are benefiting from that recommendation, and 90 percent are getting bland food that they don’t like. If we could do genetic testing and tell whether a person is salt-sensitive, then they know that effort is worth it for their health. I think that helps to make people comply with recommendations and change their lifestyles.

Unlike some drugs, which have an all-or-nothing effect, nutrition’s effects tend to be modest. But it’s clearly an important, easy intervention. And if we don’t fix a diet, then we have to treat the problems that arise from a bad diet.

Nutrition is always going to be a tough field to get precise results. It isn’t going to be perfect until we can get all the variables identified. Part of what precision nutrition is doing is helping to refine the tools we have to understand these complex systems.