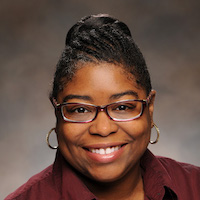 On her journey to the UNC Nutrition Research Institute (NRI), Delisha Stewart, PhD, did not shy away from detours. In fact, she jokingly refers to herself as “the scientific nomad.” The key to life, she believes, is not being afraid to stray from the expected path when following your passion. You never know who you may meet on the train, the bus, the plane…who might take you in a new direction. You’ll usually end up at the same destination, but the path you take might be slightly different; and not conforming to “the norms” can enrich your journey and better prepare you once you arrive.

A self-proclaimed midwestern girl originally from Dayton, Ohio, Stewart knew she wanted to pursue a career in science from a young age. In fact, she knew just what she wanted to be when she grew up: a doctor. An internship at the University of Dayton during the summer after her junior year of high school changed her trajectory. This Project S.E.E.D. internship got her hooked on lab work, and she has been involved in research in some way, shape, fashion, or form since that summer. She loves being at the bench, pursuing what she calls “the chase” of scientific discovery.

As an undergraduate student studying biochemistry, Stewart wasn’t particularly keen on going to graduate school. The biochemistry program at the University of Dayton was chemistry heavy and required a senior thesis comprised of a year’s worth of work culminating in publication. During that year, her advisor asked where she was planning on going to graduate school. “I looked at him in bewilderment,” she recalls. “Graduate school? I’m done with school after this!” But his question gave her pause, and she considered the possibility of pursuing a PhD. She did a search that makes her, and others, laugh to this day: she decided where to apply to school based on whether a program required Physical Chemistry (her least favorite course) as part of the degree.

Stewart ended up pursuing her PhD at the University of Alabama at Birmingham (UAB). She knew no one in Alabama, and her family wondered why she would choose to move so far away when she could stay closer to home, having been accepted to programs in Kentucky and Ohio. But early on, Stewart refused to be put into a box: not by others, nor one of her own making. When she visited UAB, the “Southern charm” as she describes it, was rolled out and she felt like she had found a new home. Midway through her PhD program, Stewart’s path took an unexpected detour. Her graduate advisor took a job at the University of Louisville. Out of a lab of about 25 people, nearly 20 moved with him. For Stewart, that spoke to the character of her mentor Dr. Miller. This is something she emphasizes as important for future scientists to consider. “You can love a discipline very much, you can enjoy what you’re doing, but if you’re working with someone who doesn’t want to invest in you, it will make it difficult and potentially miserable.” At UAB, and at Louisville, Stewart was invested in – investments that helped her reach her next level and inspired her to embrace those attributes to do the same for others in the future.

After earning her PhD, Stewart completed a post-doctoral fellowship at the University of Delaware. She did this during what she calls the “old guard” of postdocs, where a standard position lasted three years. She knew going into her postdoc, she didn’t really want to teach. But at the time, that was the expected career path, when joining the professoriate. She always envisioned going into industry and working at one of the pharmaceutical companies, in a cancer therapeutics division. Not ready to take the leap into faculty, and not finding the type of career she wanted in industry,  Stewart decided that it was time for another detour. Pregnant with her first (and only) child, she decided to take a break, and spend some time to stay at home with her son, achieving another life goal of starting a family.

Stewart is passionate when she talks about these detours. “They are the most enriching path you will walk.” That’s not to say that you shouldn’t have a plan. She also espouses the importance of setting goals for yourself: at one-, three-, and five-year increments. These goals will provide a blueprint – but that blueprint is never your final and finished product. They will guide you and lead you and engage you so that you can decide which steps you need to get to the place you have in mind. “But I will always say, never be afraid to take that detour. And most importantly, never blame yourself if it doesn’t come out the way you expected. The beauty in allowing God to choose your paths, enables you to focus on the destination.”

For nearly two years, Stewart stayed home and raised her son. Even compared to completing a PhD, she found that the challenge of being a stay-at-home mom and the level of work required to raise a young child was the most difficult task that someone can tackle – but also her most rewarding. As her son got older and more independent, she began to feel the call of research again. But she knew that an academic position wouldn’t be the best fit for her at the time. Academic research usually doesn’t come in the form of an 8-hour workday. With a toddler at home, she needed to consider the best way forward for herself and her son. She took a job working at a municipal water lab. It was another detour that many people, knowing her high-functioning capacity, just couldn’t understand.

They asked, “Why are you doing that? You have a PhD. Why are you working at a job that someone with a bachelor’s degree in biology or chemistry could do? Personally, it was ideal. I needed a job, I wanted to reintroduce myself to laboratory skills, but I had a baby at home, and I didn’t want to take away from that time. I was at the City of Dayton wastewater treatment plant for three years. Because of my PhD training, the way I did my job on a daily basis was usually at a faster pace than that of my colleagues. But the opportunity to gain an understanding about the importance of clean water and protection of ground water sources was awe-inspiring.” Eventually, she was tapped to consider applying for the manager position of the plant. It could have been a comfortable position. But Stewart knew that, long-term, it wasn’t the destination for her.

“It goes back to pursuing your passion,” she says. “From the time I did my first research experience in high school, I wanted to do cancer research. That’s what did it for me. That’s what made me excited.” And so, when the plant manager role was presented to her, she knew she would turn it down. While the importance of clean water, water conservation and the role of wastewater treatment plants is vital for our society, simply put, it was not her passion.

It was a CNN program that renewed Stewart’s spark and put her back on the path to academia. The program featured Lisa Newman, MD, a surgical oncologist, and her work with breast cancer patients. Stewart decided she wanted to go back and complete another postdoc, this time in breast cancer research. She reached out to multiple researchers, including Newman, at multiple institutions. As a practicing surgeon, Newman did not have a position to offer at that time, but some investigators at UNC-Chapel Hill did. Stewart moved her family half-way cross country from Ohio to Durham, North Carolina in February 2010 to begin as a postdoc again. And again, people asked her “what are you doing?!?!” For her, it was simple. She was ensuring that she would leave behind evidence of a life well-lived. “At one of the mentoring programs I went to, someone said something profound. He said when you’re gone, you have to leave some evidence that your life was well lived. And the evidence can be a number of things. One of my evidences will be my son. He’ll be some good evidence. But there will also be the body of work that I do – my pursuit of scientific knowledge will hopefully diminish the burden to help people suffering from cancer.”

As a postdoctoral researcher for the second time around, Stewart worked in the field of cancer genomics. Her work looked not just at how genes influence how aggressive a breast cancer is, but also at the context of the immune system and how it plays a role to either suppress cancer or how cancers figure out a way to evade the immune system and grow despite it. After her “re-entry” postdoc, Stewart moved over to RTI International in North Carolina’s Research Triangle Park. This is where she started working with the group that she works with now at the NRI, directed by Susan Sumner, PhD. At RTI, Stewart’s focus shifted from genomics toward metabolomics. Instead of looking at the genes and transcripts, she looked at metabolites and their interaction with cancer. She also continued to look at immune response and how inflammation pays a role in the disease process. She also emphasizes that Sumner is the best mentor she has had since graduating with her doctorate degree, and her guidance has made a tremendous impact on helping Stewart reach her desired goals. “She gets it. Mentorship is about being altruistic from the outset. When you approach it from a position of gratitude and wanting to pay it forward because of all the good that has been poured into you, you do it right.”

The Sumner team joined the NRI between December 2016 and June 2017, and now Stewart also researches the role of nutrition in breast cancer risk and treatment response. Chemotherapeutic treatments are toxic, and in trying to kill the cancer, cause side effects. If nutrition can be used to put a patient at an optimal level of health before the administration of these drugs, you can likely improve the patient’s outcome after going through the course of treatment.

While her journey to the NRI might not have followed the usual path and involved some detours along the way, Stewart has ended up at a destination, as faculty – primarily doing research, but still a bit of teaching, that allows her to wake up every day and pursue her passion. “I still love working the bench. There is something very cathartically pleasing when I snap on my gloves and get ready to start an experiment.” She encourages you to do the same on your journey.

“I always ask people, what do you want to do? Decide that and let that guide what you do educationally as well as professionally,” she says. “Decide what you love to do, because if you’re not doing something that you love doing, it makes it a lot more difficult to wake up and do it every day. So always pursue your passion. Don’t be afraid if it takes you a couple of times to figure out what your passion is. And I promise you, you’ll find an avenue to walk down that will allow you to pursue it.”

We are fortunate that Stewart’s passion led her to the NRI.

For more information on Dr. Delisha Stewart and her work, check out her faculty profile HERE.