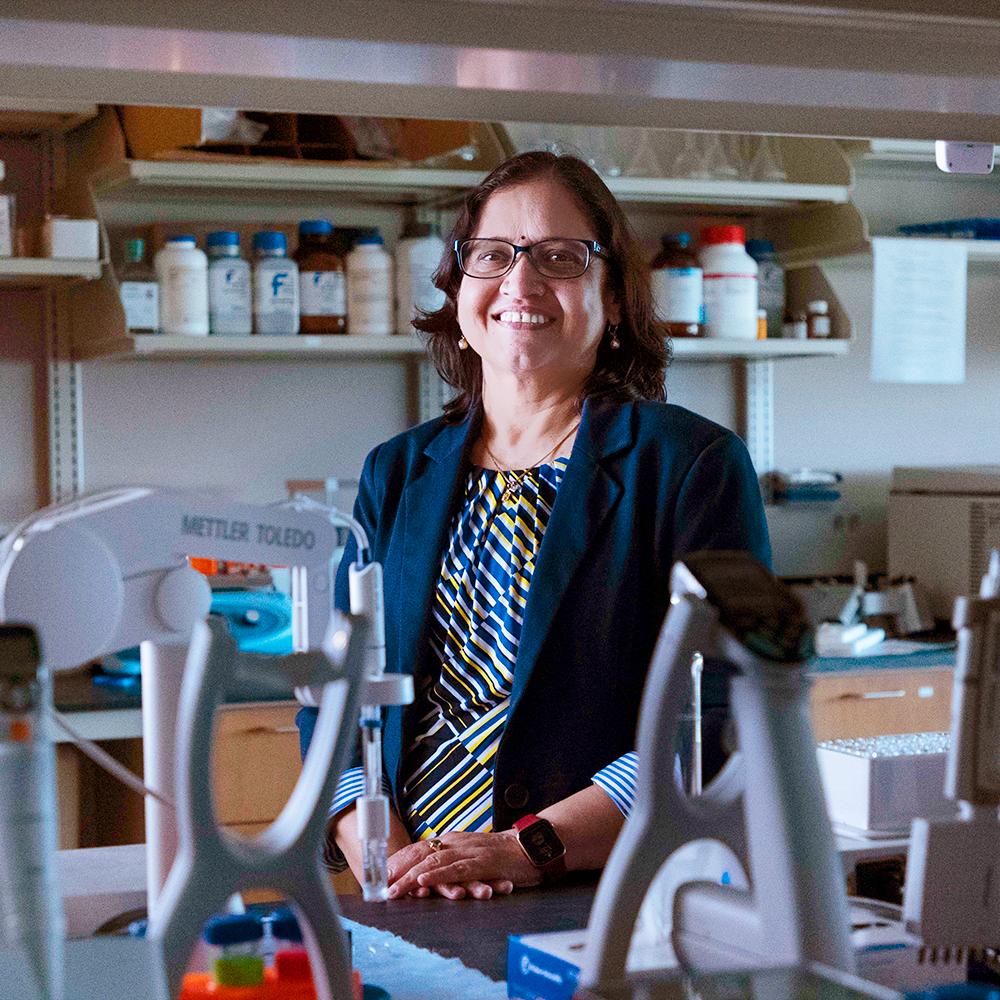 Saroja Voruganti likes sugar. But she loves talking about it.

“Did you know the body does not need any added sugars for healthy functioning? Most of our foods contain naturally occurring sugars,” she says.

Consider how much sugar a 12-ounce soda contains. One can, on average, has upwards of 30 grams. That nearly exceeds the recommended amount in one go.

“And some people drink two or three sodas a day,” Voruganti, an associate professor at the UNC Nutrition Research Institute (NRI), points out.

Across the lab, research technician Baba Mass nods his head in agreement. He recalls how one day he measured out 30 grams of sugar, put it into a bowl, and showed it to a family member who drinks a lot of soda. But it didn’t persuade her to give up the super-sweet beverage.

“It’s not easy for people to change their dietary habits,” says Voruganti, who believes the more scientific evidence we have, the better chance we have of changing minds. “If we can change just 1% of minds, or even .1% of minds, it would make a difference.”

Voruganti wants to know how genetic makeup and ethnicity affect nutrition. Basically, why do we all respond to food differently? She studies this through purines.

Purines are one of the most common chemical compounds in the world. They occur naturally in the body, but they’re also found in red meat, organ meats like the liver and kidney, seafood, and beer. When they break down in the digestive system, purines form uric acid. Too many purines means too much uric acid, which can lead to kidney and heart disease and permanent bone, joint, and tissue damage.

Because sugars like fructose and glucose are known to increase purine production, Voruganti has been researching what they do to uric acid levels in the body and the role genetics plays in how people metabolize them, helping contribute to nutritional genomics literature for diverse populations, such as Europeans, African Americans, Mexican-Americans, Native Americans, and Asians.

While she’s found much success at NRI, Voruganti’s path to nutrition research was far from direct. The support she received along the way changed her life — and now she’s trying to do the same for young researchers in the field.

Lifelong passion — and a spoonful of encouragement 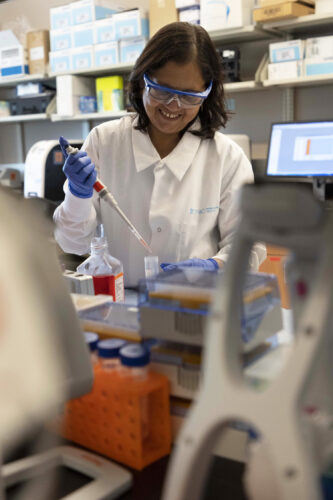 Voruganti decided to pursue her PhD after some encouragement from her adviser. Today, she runs two labs at NRI, along with the Human Research and Precision Nutrition Cores. (photo by Alyssa LaFaro)

While Voruganti completed her undergraduate degree in nutrition at the University of Delhi in 1985, she didn’t enter graduate school until 2001.

“I got married and had children, so for 15 years I was out,” she says with a laugh. “I was a homemaker.”

But by 2001, her husband was offered a job in Austin, and her boys were 9 and 13 years old — old enough to not need their mom all the time, according to Voruganti. So she began considering what was next. She decided on a master’s in nutrition from the University of Texas at Austin.

“At that point, I felt like I couldn’t do anything else,” she shares. “I loved nutrition, and I wasn’t sure if I could do a PhD because I was out for so many years.”

Her advisor, Jeanne Freeland-Graves, didn’t agree. Voruganti should go all the way. Get the PhD. Sometimes all it takes is one person to believe in you — and so Voruganti joined the program.

“After that, there were no more breaks,” she chuckles.

Voruganti graduated in 2005 and became a postdoctoral researcher in the lab of Anthony Comuzzie, an expert in the genetics of obesity. She didn’t know much about the field, but Commuzie took her on anyway. She spent the next three years learning about genetic epidemiology — how genetic and environmental factors interact to cause disease — and commuting back and forth between Austin and San Antonio, where the lab was located.

Three years later, driven by a desire to combine her research in genetic epidemiology with nutrition, she began searching for openings that would let her bridge the two disciplines. Enter the UNC Nutrition Research Institute.

At home in Kannapolis

NRI specializes in nutrigenetics, nutrigenomics, and precision nutrition — all of which are relevant to Voruganti’s research. Nutrigenetics looks at how genes, diet, and health outcomes relate to one another, while nutrigenomics unpacks how genes and nutrients interact at the molecular level. Precision nutrition involves the development of individualized nutrition plans that consider a person’s DNA, microbiome, and metabolic response to food.

Comprised of a small faculty, the institute also offers a lot of support to its researchers.

“We are like family,” Voruganti says. “It’s a small village.”

When Voruganti joined NRI in 2013, she was hired with the expectation that she’d conduct mostly data-driven research. So when she asked for a lab later that year to begin pursuing basic science research, former Director Steven Zeisel was surprised.

“But supportive,” she adds. “He gave me whatever I needed to get my lab going.”

“Saroja is very modest about her skillset, and she is eager and easy to work with,” Zeisel shares. “She brings an understanding of nutrigenetics that is needed at NRI if the center is to remain a leader in precision nutrition.”

Voruganti’s research focuses on understanding how genetic and environmental factors interact and affect complex human diseases. She studies this in three ways. The first takes existing dietary data from large, preexisting data sets to analyze and answer specific research questions. These tend to be hypothesis-generating studies, according to Voruganti.

“I love data analysis,” she says with a laugh.

She also conducts small, in-person studies to collect tissue samples and body measurements to search for genetic variants. These projects are conducted in response to hypotheses gathered from the data analyses. Lastly, she studies the nutritional pathways within cell cultures. 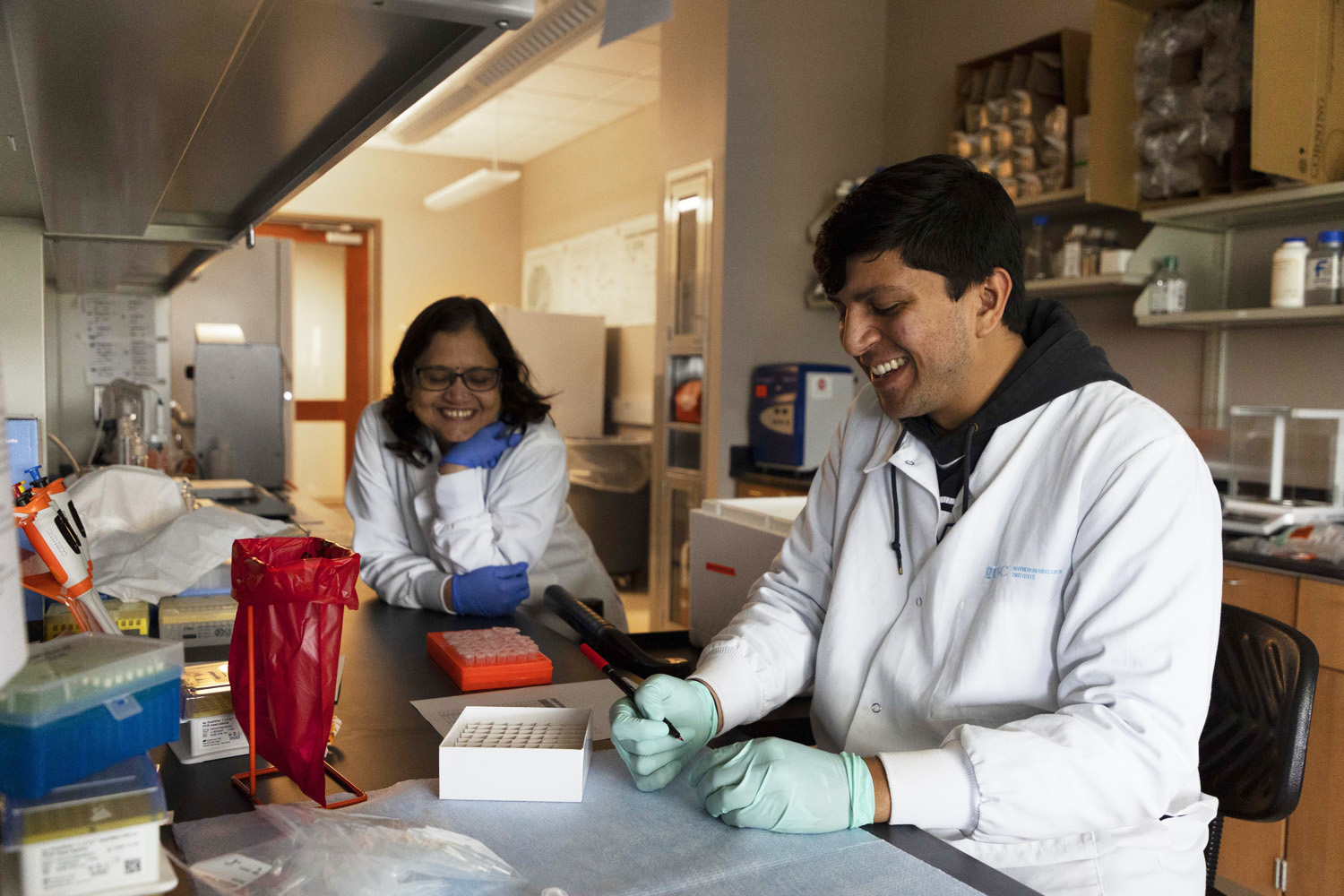 Voruganti shares a laugh with Ketan Joglekar, a research technician in the lab. (photo by Alyssa LaFaro)

One of Voruganti’s goals is to unpack how nutrition, genetics, and their affect on disease vary among different populations. She’s studied the risk of kidney disease development in Mexican-Americans and Hispanic children and heart disease development in Parsi Zoroastrians, Alaskan Natives, and American Indians.

She’s particularly interested in how nutrients and genetic variants affect uric acid levels — which, when high, can lead to a slew of kidney and heart problems. When uric acid naturally occurs in the body, it typically has antioxidant properties. But when the body has too much of it, it becomes prooxidant, meaning it produces oxygen byproducts as the body metabolizes purines. Too much oxygen can damage cells. So the more purines you consume, the more uric acid is produced and, thus, the more cell damage you’re likely to experience.

We know little about purines, according to Voruganti. Tracking their metabolic pathway in the body has led her to an anti-inflammatory molecule called inosine, which has the potential to reverse the effects of consuming too many purines. What’s more is that inosine is readily available in supplements and probiotics.

In the lab, Voruganti and her team are testing whether purines in the form of supplements and probiotics help reduce inflammation and increase energy levels. They are also studying the genes and nutrients that affect purine metabolism and related disease risk.

In a small, in-person study, they gave African American and Caucasian participants’ a sugar-sweetened beverage and monitored how their bodies responded to the influx of fructose. While most people experienced a spike in their serum urate — a product of purine metabolism — within the first 30 minutes of ingestion, their individual responses varied within the three-hour observation period. White, male, and clinically obese participants experienced higher urate concentrations than African Americans, females, and people with lower body-mass indexes.

“We are doing basic science, but ultimately we want to come up with something people can incorporate in their daily life,” Voruganti says. 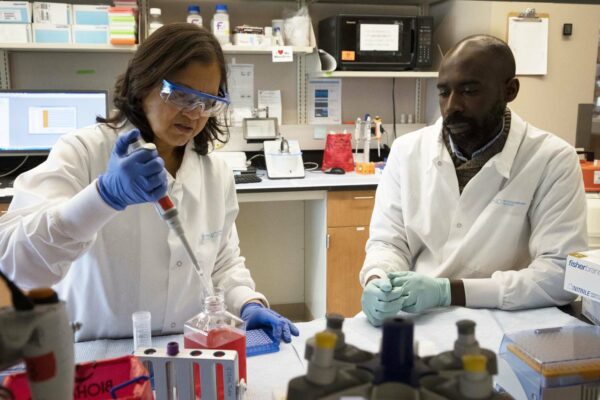 Baba Mass has worked in Voruganti’s lab for seven years and appreciates
all the support she’s given him. (photo by Alyssa LaFaro)

Voruganti’s success, in part, comes from the warm, supportive environment she creates in her lab, which mimics her own research journey. Baba Mass, for example, joined her team as an intern seven years ago — and never left.

“I was the only member without a postgraduate degree, and I used to feel very uncomfortable during lab meetings,” he shares. “Saroja challenged me to be self-confident and believe in myself. That is the kind of leader she is.”

Now, Mass is Voruganti’s research technician and oversees most of the basic science experiments that take place in the lab. He even developed his own in-house test kit for measuring uric acid in biological samples like serum, plasma, and urine. It’s proven to be cheaper, more sensitive, and as effective as the commercial kits the lab was previously using.

“I love my team,” Voruganti says. “They are like my second family.”

As Voruganti is entrusted to more and more responsibilities at NRI — like becoming director of both the Precision Nutrition Core and the Human Research Core — her teams in the lab and at the cores have reassured her they will help her in whatever way they can.

“I have a good support system — and that makes a lot of difference,” Voruganti says. “If you know somebody has your back, you can jump into anything.”

Saroja Voruganti is director of the Precision Nutrition Core and Human Research Core and associate director for clinical research services at the UNC Nutrition Research Institute. She is an associate professor in the Department of Nutrition within the UNC Gillings School of Global Public Health. The Precision Nutrition Core and the Human Research Core are supported by the UNC Nutrition Obesity Research Center, one of 12 centers in the country funded by the National Institute of Diabetes and Digestive and Kidney Diseases that is specifically designed to enhance the efficiency, productivity, effectiveness and multidisciplinary nature of nutrition and obesity-related research.

Baba Mass is a research technician in the Voruganti Lab at the UNC Nutrition Research Institute.

Steven Zeisel is a professor in the Department of Nutrition within the UNC Gillings School of Global Public Health and founding director of the UNC Nutrition Research Institute.