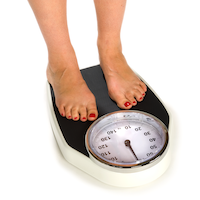 August 30, 2018 – While the link between obesity and breast cancer risk is well known, the underlying mechanisms are not fully understood. Obesity alters many conditions in cells and within the body, and it is not easy to determine which of these conditions are important to the obesity-cancer link. Consequently, it is very difficult to identify potential therapeutic targets.

The lab of Stephen Hursting, PhD, MPH, at the UNC Nutrition Research Institute has put considerable effort into understanding the association between obesity and breast cancer risk and mortality. Their latest research (Bowers et al., 2018) builds on earlier data that found that an increase in the hormone leptin was associated with tumor growth in genetically obese mice.

Bowers et al. used RNA sequencing to identify differential gene expression between tumors growing in normal-weight versus obese mice. Genes whose expression was markedly different were used for pathway analysis, which is a computational approach to grouping individual genes by physiological signaling pathway (i.e., which genes act together in a particular task). Decades of basic science research into these pathways means that researchers are now able to identify which genes are regulatory and hence more likely to be causally associated with disease. This approach showed that obesity was associated with up-regulation of several pro-tumorigenic pathways. Further analysis identified leptin as a master regulator of these pathways.

Leptin is a hormone that signals satiety. Resistance to leptin signaling is often found in obesity, and leptin levels are elevated in the obese. This study confirms a role for leptin in pro-tumorigenic potential, and through its use of RNA sequencing and pathway analysis, also identifies genes downstream of leptin that need to be investigated as more direct effectors of obesity-induced susceptibility to breast cancer, with the ultimate goal of identifying druggable targets.