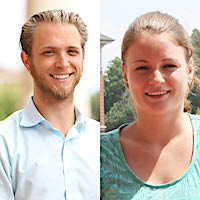 The UNC Nutrition Research Institute (NRI) is known as a center for precision nutrition research. Did you know that we are also a center for precision nutrition training? At the NRI, graduate students have the unique opportunity to learn and work alongside leaders in the field at our state-of-the-art institution. We are pleased to announce that two students have recently earned their PhD degrees under the guidance of NRI faculty.

Keri Baron, a graduate student in the lab of Natalia Krupenko, PhD, successfully defended her thesis on how ceramides, a group of bioactive lipids, respond to folate. The effects of low and high folate in mice fed a high-fat diet were studied to capture a broad range of intake, as you would see in humans. Some of their most exciting findings included:

The new Dr. Baron is looking forward to doing more work on this study, which is so large the data collection alone took a full year. There is still much analysis to be done, and more findings to be had. In the future, she would like to teach, as she loves nutrition and talking about nearly every aspect of it.

Grant Canipe, a graduate student in the lab of Carol Cheatham, PhD, successfully defended his thesis on individualized cognitive decline and the impact of gut microbiome composition. His study was focused on identification and prediction of cognitive decline using the Cambridge Neuropsychological Test Automated Battery or CANTAB cognitive research software and visual event-related potential (ERP), as well as exploring the relation between gut-microbiome diversity and cognitive performance.  Two of the most exciting findings are:

The study also included the design and implementation of novel methodology with two-step temporospatial principal component analysis (PCA) to successfully predict future performance on ERP with baseline performance on the same task, which, to Dr. Canipe’s knowledge, is the first known use of this method for this purpose. The new Dr. Canipe has hit the ground running, accepting a role as an Adjunct Professor in the Psychology Department at Elon University.

We are excited to follow the careers of Dr. Baron and Dr. Canipe as they continue to hone their skills as scientists and teachers. Congratulations to our newest PhDs!