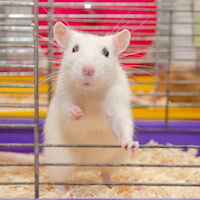 The fundamental principle of precision nutrition is that different people, by virtue of their genetic backgrounds and life exposures, may have different nutritional needs. A compelling example of this principle is found in a recent publication by current NRI faculty Susan Sumner and former NRI faculty Folami Ideraabdullah (Xue et al., 2020), who looked at whether mice with different genetic backgrounds had different metabolic responses to dietary vitamin D deficiency.

While the metabolic impacts of vitamin D deficiency have been extensively studied, the vast majority of mouse studies only looked at these impacts within a single mouse strain (i.e., all of the mice used in a given study were genetically identical). In contrast, Ideraabdullah’s and Sumner’s study looked at the response to vitamin D deficiency in eight genetically distinct strains of mice. This is important because an individual’s genetics can affect how he/she responds to a dietary challenge. One of the difficulties in translating mouse studies to human (clinical) research is that we (twins excepted) are not genetically identical to each other. What works in a particular mouse strain may not work in a different strain; likewise, what works in one person might not work in another.

In this study, scientists fed vitamin D-sufficient or vitamin D-deficient diets to eight genetically different mouse strains, and measured their circulating vitamin D levels and liver metabolites after 12 weeks. Notably, Ideraabdullah and Sumner found multiple metabolic differences among the strains. Some strains showed lower circulating levels of vitamin D, suggesting they might be more susceptible to dietary deficiency (i.e., a vitamin D level that causes an effect in one strain might not affect a different strain). Additionally, the detailed metabolomics analysis found that while all strains showed an effect of vitamin D deficiency, the specific effects differed among strains. Overall, this research clearly shows that the same dietary challenge can elicit different effects in individuals with different genetic backgrounds.

This study did not attempt to identify the genetic basis of the observed differences. This is a particularly important question to address but, given the complexity of the mouse (and human) genome, one that will require substantial effort to answer.