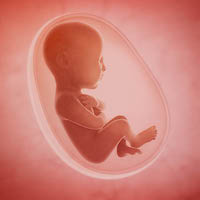 Carol Cheatham, PhD, was recently awarded an R21 grant from the National Institutes of Health (NIH) National Institute on Alcohol Abuse and Alcoholism (NIAAA). Her proposed preclinical study will explore the synergy of nutrients (which will be controlled by diet) and the prevention of Fetal Alcohol Spectrum Disorders (FASD).

Despite prolific marketing campaigns explaining the dangers of consuming alcohol during pregnancy, the prevalence of FASD in the United States is 2-5%, which is higher than the rate of Autism Spectrum Disorders. Whether it is because a woman was unaware of the pregnancy, ignorant of the risk, dismissing of the risk, or unable to abstain, women do drink during pregnancy, and therefore, it is imperative that we find a way to prevent FASD. Optimal nutrition is essential for the developing fetal brain and is generally lacking in active drinkers.

One nutrient, choline, has been shown to ameliorate the effects of fetal alcohol exposure in animal models. Translation to the clinic shows promise, but scientists report mixed or limited results. Importantly, with each successive pregnancy, DHA stores become depleted, and with each successive pregnancy, the risk of FASD increases. Thus, maternal DHA deficiency may be implicated in FASD. Indeed, DHA and choline work together to deliver DHA to the brain where it supports brain function. This synergistic activity is further enhanced by the addition of uridine. To explore this synergy hypothesis, we will test DHA, choline, and uridine individually and together in a preclinical (rodent) study. Our central hypothesis is that the synergistic activity of DHA, choline, and uridine will mitigate the effects of fetal alcohol exposure on the developing hippocampus and frontal lobes. Importantly, these experiments will be the first in a program of research designed to establish the mechanisms through which synergistic nutrients ameliorate the effect of prenatal alcohol exposure on fetal brain development.

In the proposed work, pregnant dams will be fed experimental diets with or without ethanol during gestation. Subsequent pups will be observed for early physical (ear unfurling, eye opening, appearance of fur) and behavioral (e.g., self-righting, cliff avoidance) development in a series of tests. Groups will be compared on day of success in a Chi-square analysis for discrete variables. When the pups are 45 days old, random subsets (one male and one female per litter) will be trained and tested on a classic Morris Water Maze spatial and working memory tests. Data will be subjected to analyses of variance between groups. Brain tissue will be assayed for phospholipid and uridine content and synaptic proteins will be quantified with Western blots. We predict that the ethanol effects will be reduced in the multi-nutrient groups compared to the unsupplemented and single nutrient groups. The results of this experiment will inform interventions for pregnant women who are unable to abstain from consuming alcohol during pregnancy and their at-risk fetuses. If our preclinical work shows promise, we will translate the work to the clinic, working with support programs in the US and Canada to provide the food to their clients and thereby, improve the outcomes and the subsequent lives of their unborn children.