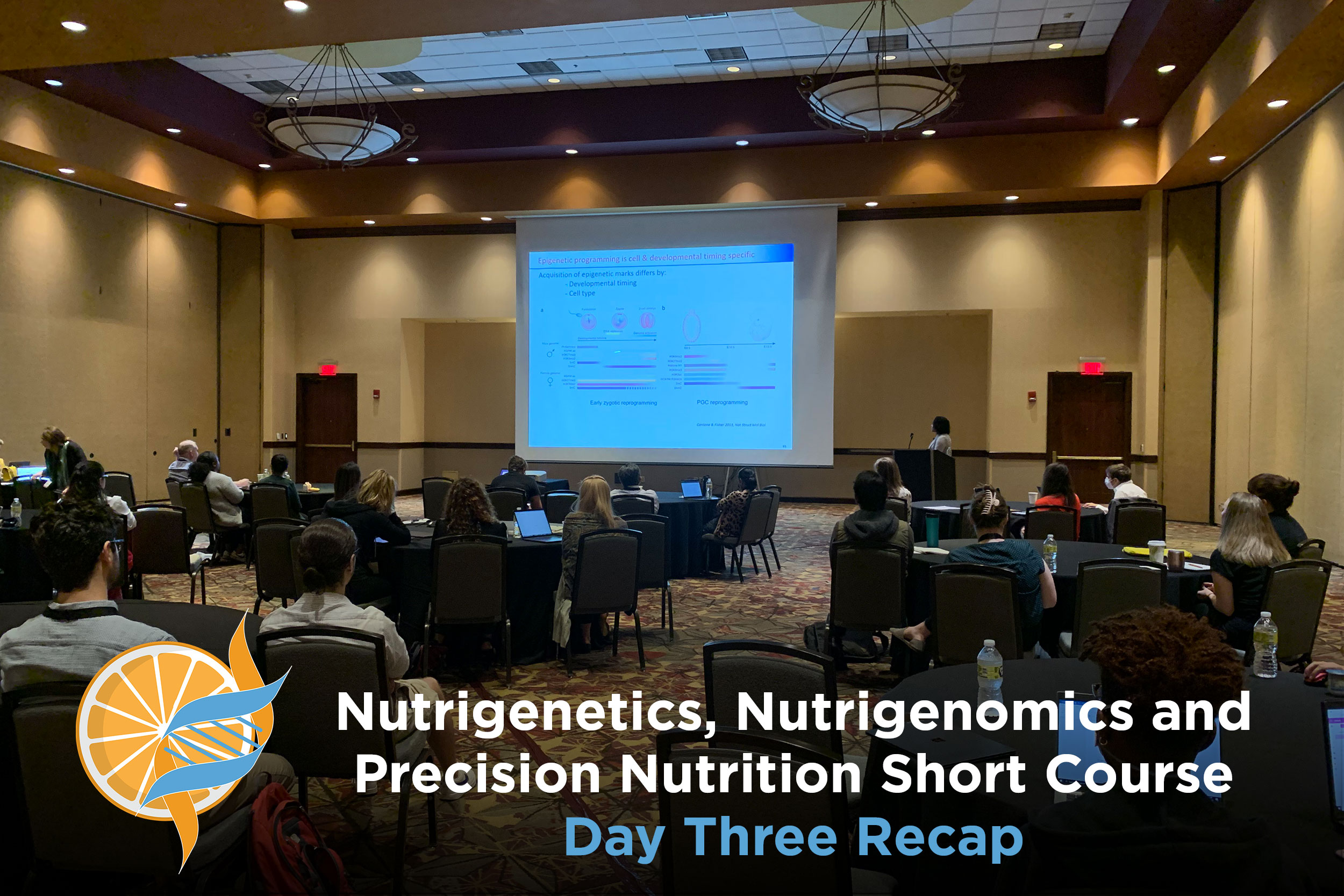 Speakers on Day Three of this course delved into the significance of genetics and epigenetics in nutrition research.

Katie Meyer, ScD, assistant professor of nutrition, UNC Nutrition Research Institute, presented “NGx and Microbiome.” The gut microbiota is the set of microorganisms that colonize our digestive tract. Human beings host as many as 100 trillion bacteria in their gastrointestinal tract (for perspective, this is more than the total number of human cells in their bodies).To study this complicated system, scientists use two broad types of sequencing: 1) marker gene 16S rRNA, used to identify and compare bacteria within a specific region of DNA; and 2) whole-metagenomics sequencing, which sequences all DNA in a sample. Meyer detailed how to use these tools to study microbes in the gut. She offered an example of a study on diet and the microbiome that showed a relationship between the metabolite TMAO and cardiovascular disease. The study illustrated the intersection of diet, gut microbial function, and host genetics on health. There are a number of challenges to this field of research; for example, large human studies are needed to define a core microbiome, characterize microbial variability, and identify targets for further study. Currently we lack gut microbiome data from diverse populations. However, Meyer believes that there is growing interest in this field and rapid development will ensue.

Folami Ideraabdullah, PhD, associate professor of genetics, UNC Chapel Hill, presented a primer on  “Nutrition and Epigenetics,” discussing epigenetic mechanisms and the role of nutrition in modulating them. Epigenetics studies the changes in organisms caused by modification of gene expression rather than alteration of the genetic code itself. Epigenetic mechanisms are ones that can act independently of genotype and basic transcriptional machinery to regulate inherited differences in gene expression, RNA and protein function, stability, localization, and genome structure. Epigenetics provides a mechanistic role for nutrition in long-term, heritable, complex human diseases. It can reveal early detection biomarkers of exposure and prediction of health later in life.

Expanding on epigenetics and its relationship with nutrition, Natalia Krupenko, PhD, associate professor of nutrition, UNC Nutrition Research Institute, presented “Nutrient and Genetic Regulation of Methylation Potential.”  Methylation is the process of adding a small chemical marker (i.e., a methyl group) to a larger molecule, typically DNA or a protein. It is one of the more common types of epigenetic modifications, and the presence or absence of this marker can change how the larger molecule functions to impact gene expression, etc. as described above. Importantly, the extent of methylation within a cell is dependent on nutritional status and on variations known as polymorphisms in genes associated with the methylation/demethylation processes and provides a chemical mechanism for gene-nutrient interactions in epigenetics. Krupenko used her research on folate as an example of these processes.

The day’s general session ended with Elizabeth Tejero, PhD, head of laboratory, Laboratory of Nutrigenomics and Nutrigenetics, National Institute of Genomic Medicine in Mexico giving her presentation, “Epigenetics and metabolic programming: role of microRNAs.” MicroRNAs (miRNA) are non-coding RNA molecules that regulate gene expression and most of the biological processes. They play a significant role in detecting metabolic disease because their expression levels will change in diseases such as cancer and liver disease. Tejero described the role of miRNAs in metabolic programming and control, identified nutrients influencing miRNA expression, and explained how food compounds can regulate all the miRNA segments coded by a genome (miRNome) and that could be used as potential biomarkers for diagnosis and therapeutic (molecular) targets.

Following the general session, participants once again went into their breakout sessions, practice or research focused. (Learn more about these sessions in the Day One Summary.)

NGx hosted a banquet dinner at the conclusion of Day Three with Robert Waterland, PhD, professor, Department of Pediatrics and Department of Molecular & Human Genetics, USDA/ARS Children’s Nutrition Research Center, Baylor College of Medicine, giving the keynote talk, “Nutrition, Epigenetics, and Human Disease: Research Update and Lessons Learned.”  Waterland is globally recognized for his research into how embryonic, fetal, and early postnatal nutrition establishes lifelong patterns of gene expression that impact metabolism and disease risk into adulthood. In his keynote address, he described his research into “Developmental Origins of Adult Disease,” what he sees as some of the fundamental problems facing human epigenetic epidemiology, and what his research team is doing to overcome these problems. Put simply, the Human Genome Project largely ignored the human epigenome, and the existing data on methylation are insufficient. His recent research is targeted toward substantially increasing population-wide methylation studies. Additionally, Waterland presented a career retrospective, including hurdles he overcame and offering advice to junior researchers for overcoming the hurdles that they face.